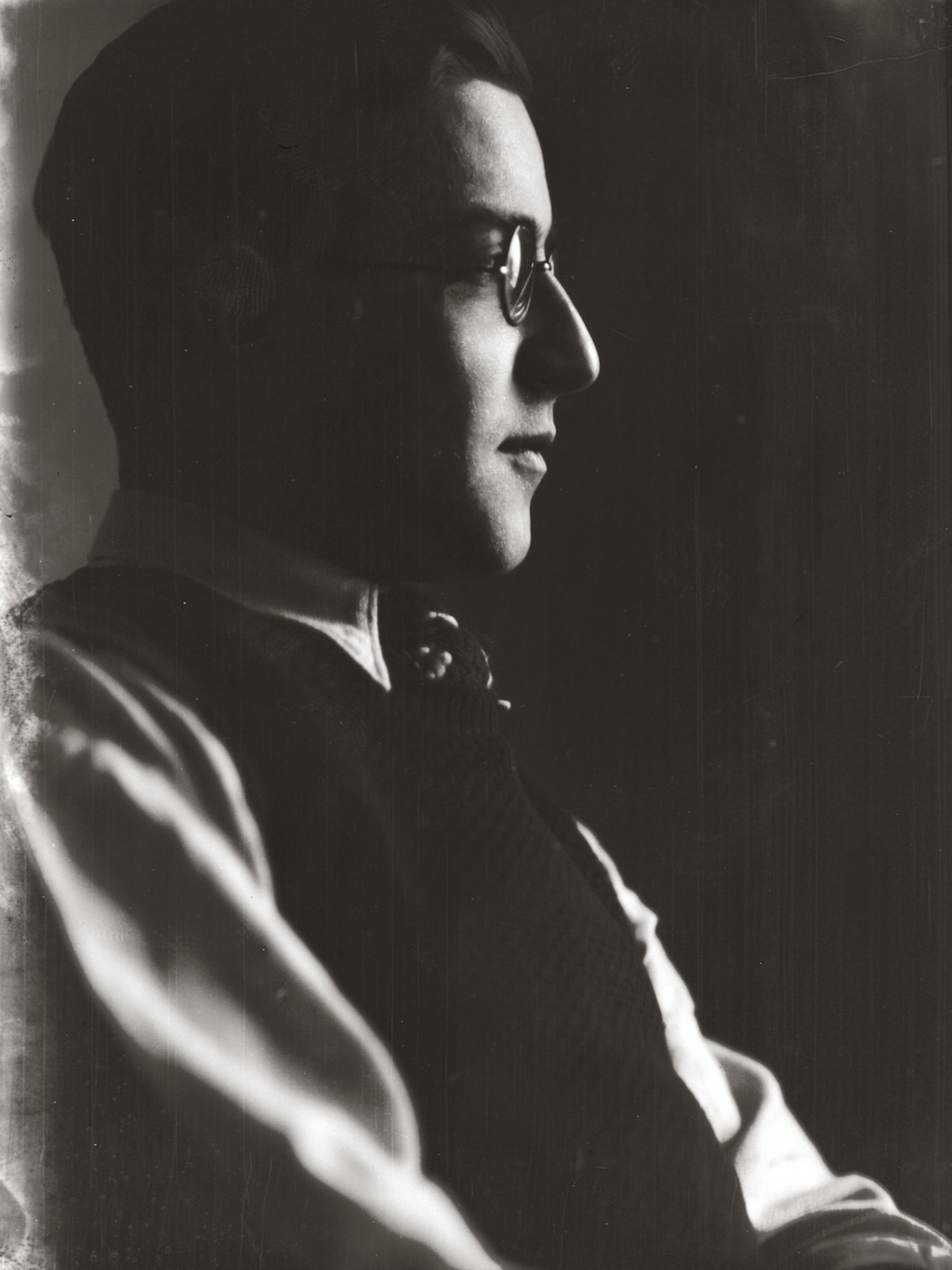 Thirty-four when Jacobi met him, Mikhail Kol’tsov was already an accomplished and influential journalist, editor, and publisher, as well as a central figure in Soviet politics. Importantly for Jacobi, Kol’tsov also promoted photography as a key medium for documenting cultural and economic progress in the Soviet Union. The founder and editor of three journals that emphasized or were dedicated to photography, Kol’tsov was the de facto father of photojournalism in the USSR (Wolf 1999, 57). There was perhaps no other contact she made in Moscow who was as important for her own work as a photographer on her trip. Kol’tsov was the subject of some of Lotte Jacobi’s most arresting portraits from the USSR.

Close to an array of luminaries, from Josef Stalin to Ernest Hemingway, Kol’tsov was at the center of the state-sponsored publishing in Moscow, while he was also one of Stalin’s favored emissaries to Western Europe. Kol’tsov’s orbit, whether centered in his Moscow apartment or in Madrid’s Hotel Gaylord during the Spanish Civil War, was the place to meet influential politicians and intellectuals from the USSR and abroad. Probably through her connection to Egon Kisch, sometime during her stay in Moscow Jacobi went to Kol’tsov’s apartment at the newly opened House of Government, where favored members of the Communist Party lived across the Moskva River from the Kremlin. It is strange that Jacobi didn’t mention seeing Kol’tsov in her travel diary. 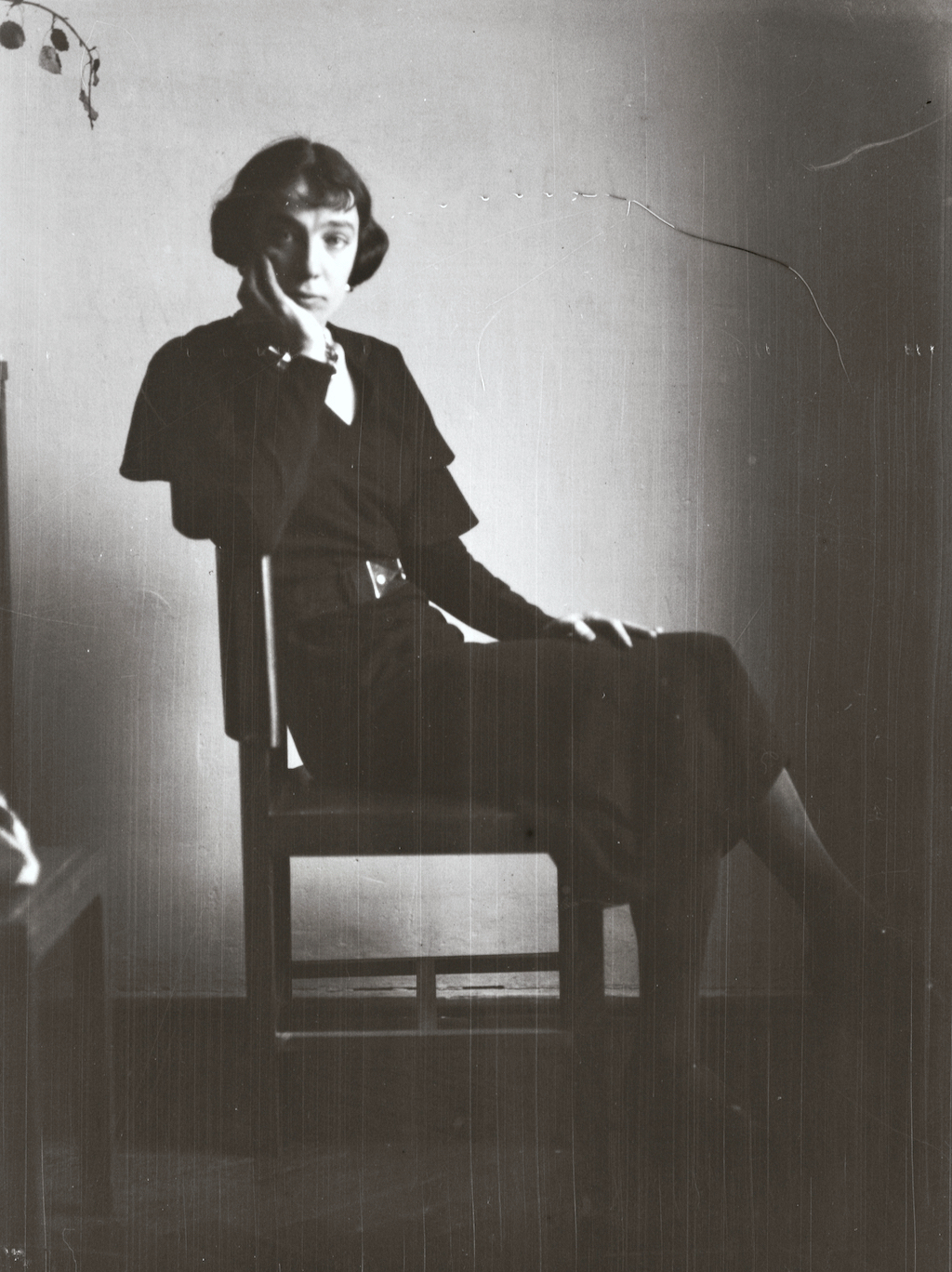 In the 1920s, Kol’tsov’s rise to prominence in the government was rapid. Born Mikhail Efimovich Fridliand in Kyiv to Jewish parents, Kol’tsov excelled in school from an early age (Yefimov 160). He fought in the Russian Revolution of 1917 and became a fervent communist under the influence of the Marxist revolutionary, Leon Trotsky. When Kol’tsov and his younger brother Boris Yefimov (1899-2008) moved to Moscow, they changed their last names from Fridliand, considering it too Jewish when there was rising anti-Semitism in Russia (Martin). By the 1920s, Kol’tsov wrote for Pravda, the official newspaper of the communist party, and was also on its board. At a time when there was a close connection between Soviet politicians and writers, he managed the state publishing house Ogonëk (later renamed Zhurgaz), which published numerous journals and newspapers, as well as collections of the works of famous Russian authors (Clark 79; David-Fox 220, 361; Yefimov 161). Publishing was a family affair: Kol’tsov’s brother Boris was a favorite political cartoonist of Stalin who contributed many of his cartoons to Pravda. Boris continued to have a warm relationship with Stalin, even though the Soviet leader eventually had his brother executed.

Kol’tsov had worked as a documentary filmmaker during the Russian Civil War, but in Moscow in the early 1920s, he became interested in photojournalism. In 1923, he founded and became editor-in-chief of Ogonëk (The Flame), the first Soviet illustrated magazine. Ogonëk established illustrated magazines as important vehicles for educating people on Soviet progress in education, culture, collectivization of agriculture, and industrialization. Kol’tsov’s cousin, Semen Fridliand (1905-1964), became a documentary photographer and photo editor for Ogonëk, and worked for the photo agency Soyuzfoto (Morozov and Lloyd 180). Next, in 1926, Kol’tsov founded Sovetskoe Foto (Soviet Photo), which focused on the technical aspects of photography (Wolf 2011, 34). The journal had tips on how to take a successful photograph and sponsored contests with lists of appropriate topics (Burgardt 215-216). The goal was to train a new fleet of “worker photographers” to document the Soviet way of life in Russia and the peripheral Soviet republics. A third journal, SSSR nu stroike (USSR in Construction)—published in English, French, German, and Russian—was another brainchild of Kol’tsov. Initially aimed at a foreign audience, Kol’tsov wanted to promote Soviet developments through a dedicated photo journal with higher production values (Wolf 1999, 58).

In 1932, Kol’tsov went to Berlin, where he was close to many German intellectuals. He fell in love with his translator, the German writer Maria Gresshöner, and took her back to Moscow to become his common-law wife (Clark 146). Gresshöner changed her last name to Osten (“east” in German), signaling her sympathies with the East, i.e., the USSR (Slezkine 382). Kol’tsov and Osten were fervently opposed to the fascist governments of Hitler, Mussolini, and Franco; and both went to Spain as war correspondents during the Spanish Civil War (1936-1939). Kol’tsov went to the front, sent dispatches to Pravda, and also held court in Madrid, where he met Ernest Hemingway when the American writer was a war correspondent there as well. According to Frederick White, “much of Hemingway’s understanding of the [Spanish] Civil War was influenced by access to information afforded to him by Kol’tsov, the foreign correspondent, who also was reputedly Joseph Stalin’s man in Spain” (White 44). Hemingway immortalized Kol’tsov in For Whom the Bell Tolls as the character Karkov (White 45). First appearing in five parts in the Soviet journal Novyi Mir (New World), Kol’tsov’s Spanish Diary (Ispanskii dnevnik) was published in the fall of 1938 to much acclaim (White 56). 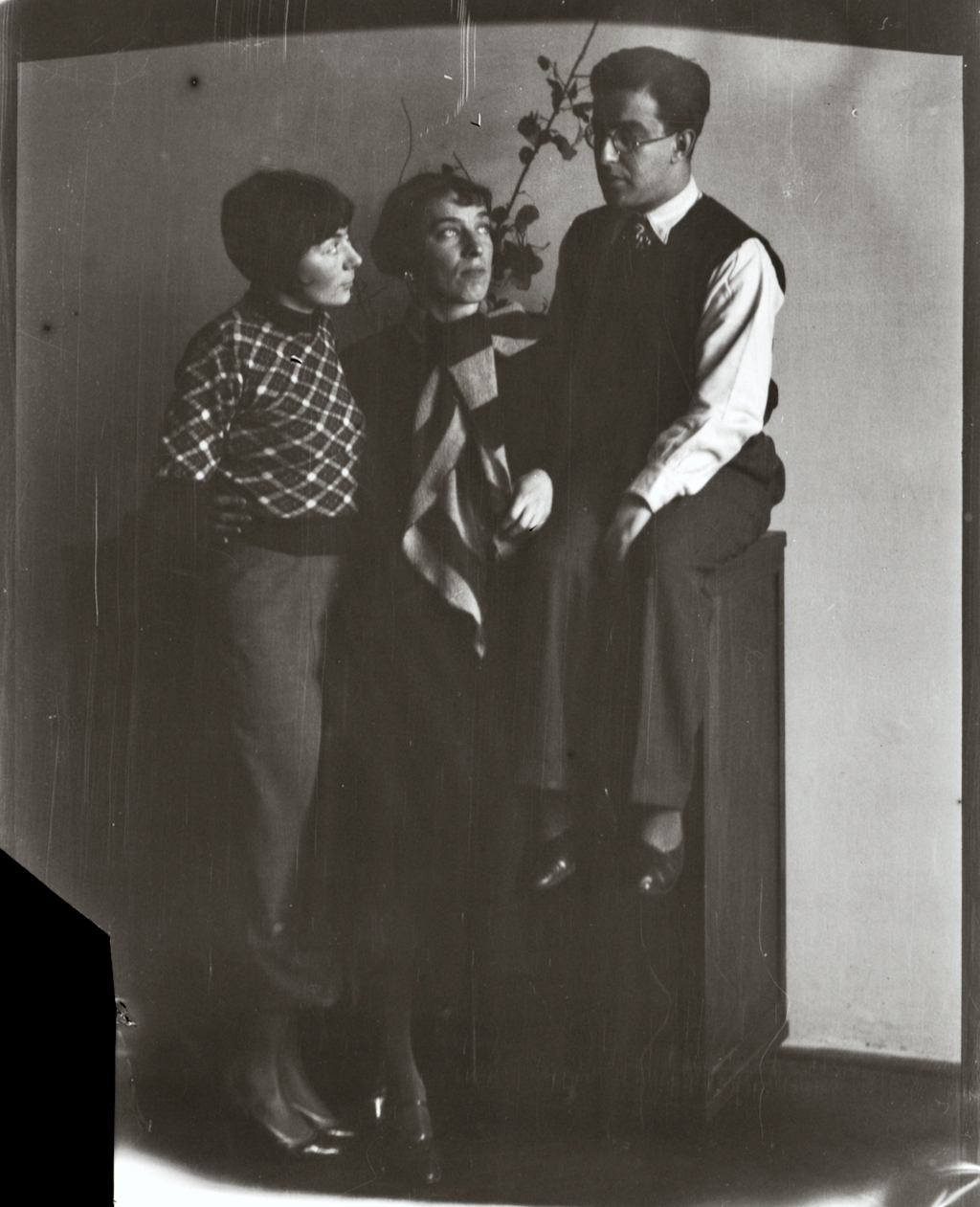 Kol’tsov’s final meeting with Stalin was unsettling. Back from Spain for several months in the spring of 1937, Kol’tsov reported to Stalin about developments in Spain. Oddly, as Kol’tsov was leaving, Stalin called him “Don Miguel” and then asked him if he owned a gun. When Kol’tsov said yes, Stalin inquired if he would use it, implying to commit suicide. Kol’tsov said no and left but was troubled by this strange interchange (White 54). According to his brother, Kol’tsov continued to receive honors, saying, “In the summer of 1938, he was elected to the Supreme Soviet, and a little later, a corresponding member of the USSR Academy of Sciences. For his valor in Spain, he was awarded the Order of the Red Banner” (Yefimov 163). Nevertheless, Kol’tsov was arrested in December 1938, interrogated, tried, and then finally shot in February 1940.

Why was this loyal Stalinist executed? Kol’tsov was yet another of Stalin’s inner circle who met his end in the Great Terror of 1936-1938. As the Soviet leader became more nationalistic, he no doubt thought that Kol’tsov was too connected with the West and with the war in Spain that no longer interested him. Kol’tsov was also a former Trotskyite. (It couldn’t have helped Kol’tsov’s cause that he had an affair with the wife of Nikolai Ezhov, the People’s Commissar of Internal Affairs who in 1936-1938 was responsible for rounding up people during the Great Terror (White 59).) Although Maria Osten had gone to Paris in 1938 to become the head of the Paris bureau of Das Wort (The Word), a German language journal for German expats in the USSR, she tried to help Kol’tsov after he was arrested but to no avail. She returned to Moscow, but she too was executed, in 1942 (Clark 336). 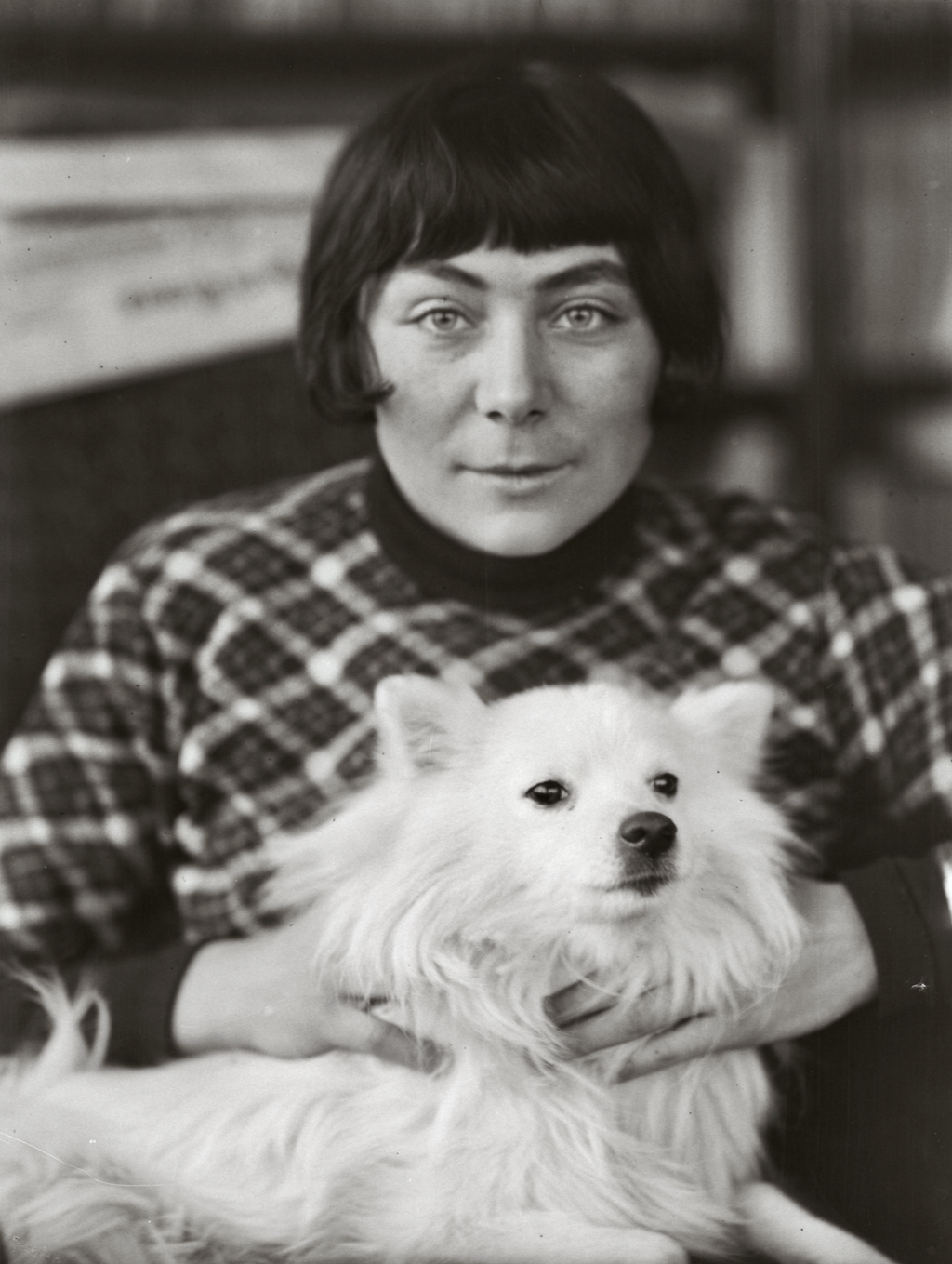 Jacobi’s photographs of Kol’tsov are remarkable for their intimate portrayal of this extraordinary figure in Soviet history. Carefully posed with provocative lighting, and taken with her large format camera, the photographs capture Kol’tsov at home. According to Yuri Slezkine, Kol’tsov lived in the four-room Apartment 143 on the 8th floor of the House of Government with his wife Elizaveta Ratmanova and Maria Osten (382). (Kol’tsov’s favored status is also demonstrated by the fact that he drove his own car and had a dacha north of Moscow (Slezkine 233-34).) This was an interesting place to be a guest, for as the head of the Foreign Commission of the Union of Soviet Writers, Kol’tsov entertained an array of international cultural and political figures at the apartment (White 47). He was reportedly sharp and witty, as well as multi-lingual, speaking French, German, and Spanish, in addition to Russian (Clark 33). Though he wasn’t tall, Kol’tsov was nonetheless a striking figure, with thick chestnut hair, dark-rimmed glasses, and fashionable suits (White 47). Some of the photographs of Kol’tsov, his wife Elizaveta, and Maria are glamorous; others are playful, such as one with Elizaveta and Maria, with the short-statured Kol’tsov sitting high on a box, or one of Elizaveta and Maria lying in bed under the covers.

While for Jacobi this photo session with Kol’tsov was an important portrait opportunity, it was also a way to get to know the man most responsible for the development of photojournalism in the USSR. In the early 1930s, Kol’tsov was looking for photojournalists, including women (Burgardt 228). One can see how Jacobi’s subjects—education, industrial workers (including women), farmers, closeup portraits, ethnic types, and the like—were not only the things shown to foreigners on Intourist and VOKS tours (VOKS also distributed USSR in Construction abroad). They were also the kind of photographs that Kol’tsov sought for his journals. However, there is no evidence that her photographs were ever published in Soviet journals, including those founded by Kol’tsov.

Slezkine, Yuri. The House of Government: A Saga of the Russian Revolution. Princeton UP, 2017.